Three of the Launch Test plushies and a blue version of the Cybunny were released in March 2002 at retailers Limited Too and Isetan. These were manufactured by Snap!Toys, who would go on to produce hundreds of Neopets plushies over the next several years.

The tags are shaped like a Neopet with a short description of its species on the back. For the earliest plushies, these tags were attached to the paper tag on the bottom of the plushie instead of hanging from the plushie itself. 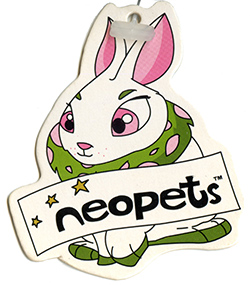 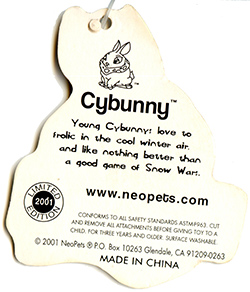 The children's accessory chain Claire's soon joined in on the Neopets craze and introduced a Petpet collection, which included a 5 inch Doglefox, Blue Noil, Harris, and Angelpuss. A White Doglefox and Kadoatie soon followed.

Limited Too sold some larger, limited edition 10 inch plushies. These plushies are were much softer than the normal 7 inch plushies.

These small plushies were exclusive to Limited Too and only four were produced: Blue Kacheek, Blue Aisha, Red Kau, and Red Scorchio. They were made with lower quality fabric than the larger versions. This tag has a rainbow holographic background with various Neopets. These tags are similar to the tags on Limited Too's Neopets shirts, which is why it tooks very different compared to other plushie tags. Most interestingly, the design on the tag is a sticker that can easily be peeled off from the top. 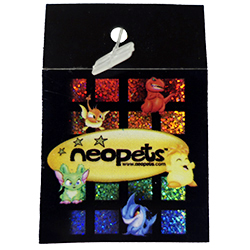 Several plushie door hangers were also produced. These have the words "Do not disturb" on one side and "Come In" on the other side.

In late 2003, collectors could now buy Petpet plushies that are more appropriately scaled, around only 4 inches tall instead of full-sized. This petpet version of the original Neopet plushie tag were also downsized to fit these mini plushies. 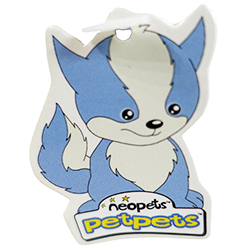 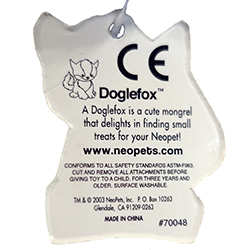 This page was written by ummy and last updated on November 23, 2021.